Library Browse BEHIND THE LIONS: PL... 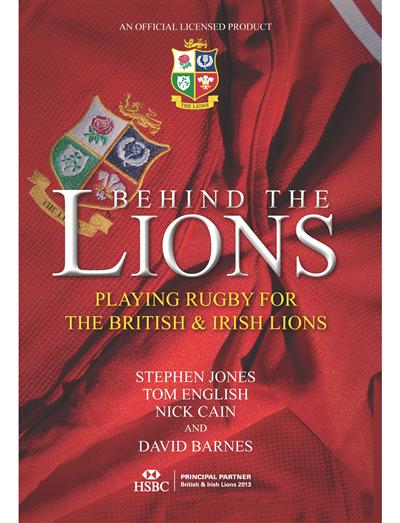 Behind the Lions: Playing Rugby for the British & Irish Lions

By Stephen Jones, By David Barnes, By Nick Cain, By Tom English

Loading...
'comfortably the most interesting and entertaining history of the Lions' - The Irish Times'a magical history' - Daily Telegraph'Fascinating . . . both heart-warming and View more
Save for later

Behind the Jersey Series

Behind the Lions: Playing Rugby for the British & Irish Lions
9780857905291
by Stephen Jones
by David Barnes
by Nick Cain
by Tom English
Behind the Jersey Series

'A must for rugby lovers of any generation' - East Cork Journal ***** - Rugby World 'utterly compelling' - Planet Rugby 'comfortably the most interesting and entertaining history of the Lions'... View more
Bertrams Star Rating: 5 stars (out of 5)

Stephen Jones is a multi award-winning 'The Sunday Times' rugby correspondent and world-renowned rugby expert. He is the author of several books on the sport, including 'Lion Man: The Autobiography of Ian McGeechan', 'Midnight Rugby: Triumph and Shambles in the Professional Era', and 'Endless Winter: Inside Story of the Rugby Revolution' which was the winner of the prestigious William Hill Sports Book of the Year award. Tom English is the award-winning chief sports writer for the 'Scotland on Sunday' and has been voted Scottish Sport's Feature Writer of the Year by the Scottish Press Association for three years running. He has held posts with 'The Sunday Times', 'Sunday Express' and 'The Scotsman'. He won Rugby Book of the Year at the 2010 British Sports Book Awards for his novel, 'The Grudge'. Nick Cain is a rugby columnist for 'The Sunday Times' and chief writer for 'The Rugby Paper'. He edited Rugby World magazine for nine years, and is the co-author of 'The Lions Diary' with Jeremy Guscott and 'Rugby Union for Dummie's. David Barnes is a freelance journalist, covering rugby for various newspapers. He is the co-author of Jim Renwick's autobiography, 'Centre of Excellence', and the co-author of 'Behind the Thistle: Playing Rugby for Scotland', published in 2010.
Close